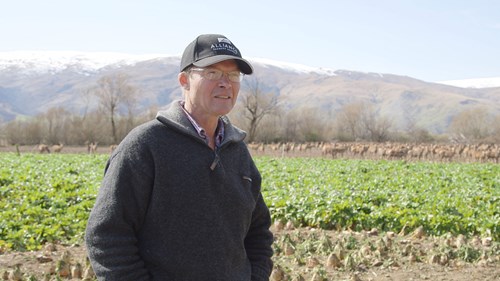 When Simon Wright became manager of Fairlight Station 16 years ago, a condition was that deer would be introduced. It was the beginning of a true vocation.

“The genetics and breeding programmes in recent years have made it a very exciting time,” he says. “There have been significant improvement in productivity. Over our time here, our average kill weight has increased by more than 12kg. So that’s been one of the rewards – and I’ve developed a passion for deer farming.”

Located near Garston, in Northern Southland, Fairlight extends across  2000 Ha of  hill and high country and 500Ha of arable. 1,400 Ha is fenced for deer, currently including 2,300 hinds, plus yearlings. Simon also farms 600 Hereford beef cows  and replacements and 3,400 Headwaters ewes, plus hoggets.

The farm targets high 12-month growth rates for deer, with early fawning – spikers need to be killed before competing for summer grazing with lamb and cattle fattening

“It’s a good environment for deer,” says Simon. “The drier climate is suited to deer farming. It’s been a challenge some years with venison prices but you hang in there in the tough times and reap the rewards in the good ones.”

Fairlight has been supplying Alliance Group for more than a decade.

“We’re very happy with that,” he says. “We’ve had the same livestock representative for most of that time. They have the ability to shift livestock when you need to and are proactive around marketing – and we’re pleased about their new venison plant.”

In May 2019, Simon hosted a visit for Alliance’s Pure South Discovery Series, which brings top international chefs to tour some of New Zealand’s iconic farms, talk to the farmers and sample the product.

“Consumer demands are evolving quickly and we need to produce what the customer wants,” he says. “Developing the more profitable food service sector makes sense. Farmers are under financial pressure in so many ways. We need to capture more value where we can.”

“To me, the future of farming in New Zealand is about telling our story and providing only the finest quality product,” says James Murray. “We’re breeders of cattle and sheep but at the end of the day, we produce a meal and we produce wool and we want our meat to have the best possible flavour and texture and  for the wool to make the finest fabric. That’s the way we have to think as farmers. If I wasn’t thinking that way, I might as well stay in bed.”

James, wife Becky and their adult children  farm 1,400 ha at Matariki on the north side of the Clarence River, plus their long-standing 600ha Wharanui block, north of Kekerengu and a 1,250ha block near Ward, purchased last year. Their focus is on their Hereford stud and mixed Corriedale/halfbred flocks.

The Murrays are famed for their annual bull sale – not least for providing a chopper to fly prospective buyers in when roads were closed following the 2016 Kaikoura earthquake.

That temporary isolation also led to the family switching processors, sending their lambs to Alliance and ultimately to them signing up this season to supply lambs to the premium Silere Alpine Origin Merino programme, a partnership between Alliance Group and The New Zealand Merino Company.

“New Zealand Merino has done a great job of telling the merino wool story and marketing the wool and we saw Alliance taking the same approach with Silere,” says James.

“It’s an exciting opportunity. We also like the strong connection with the end market, with reports from chefs and other customers. Farmers want to know where our meat and wool is going and what people think of it.”

Silere Alpine Origin Merino is seeking to further grow numbers of lambs supplied for the programme. Alliance recently released a 12-month Silere contract to shore up supply to meet the growing market demand from Ocado, the UK’s leading online supermarket, and other channels, including the food service sector in the UK and Asia.

The Murrays have 2,500 ewes and a 550-strong Hereford stud at Matariki, farmed with son Jack and his partner farm consultant Sophie Black, and a further 1,300 ewes and 100 Herefords at Wharanui. At Ward, son Sam and his partner Salome farm 2,000 ewes and 300 cattle.  Daughter Lucy provides further expertise in her role as a soil scientist.

They have been putting Merino rams over Corriedale ewes for more than five years. The original aim of producing a finer wool also resulted in a finer-grained meat.

“We aim to breed a multi-purpose sheep every time,” says Sam Murray. “We are currently working to breed more fat cover onto the ewes, to further improve the pH values of the meat, and lamb survivability. That’s included bringing in some rams from EBV programmes.”

The Murrays have scanning percentages of 175 per cent for ewes on grass. They aim to finish all their own lambs, draft at 40kg, shear in January, achieving about 1.5kg of wool from each, and send for processing at 18kg on the hook.

“I believe we have an awesome product,” says James. “I’m proud to invite guests over and put our lamb on the table, and it’s beautiful. I want consumers to have that same experience. We have high specifications in place and if an animal doesn’t meet those specs, they don’t go on the truck. All farms should be aiming for top level – we can’t settle for average.” 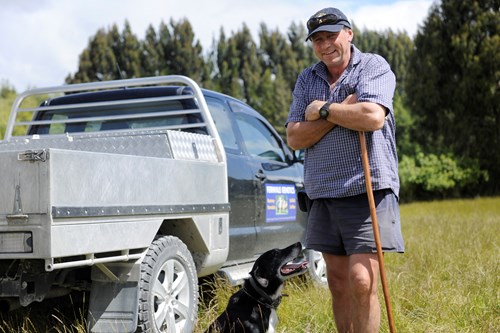 Third generation West Otago farmer Lloyd Brenssell has been sending his lambs to Alliance Group for as long as he can remember – and now he’s delighted to also be a supplier for the co-operative’s new premium product - Handpicked 55 Day Aged Beef.

The Fernvale stud was founded by Lloyd’s grandfather John Nelson Brenssell in 1946. The land is very varied, made up of five different farms over 9,500 hectares and ranging from 160m above sea level to 500m on parts of the Umbrella Range.

“My father, Harry, was an Alliance supplier and I’ve been supplying Alliance for the 25 years I have been farming here,” says Lloyd, who runs the Fernvale sheep and beef operation at Moa Flat, Tapanui.

“We have always supplied our lambs to Alliance, but I also have 1,200 breeding cows, – our 18-month Angus are as good as you get. Over the years we have supplied a number of other processors but I’m a 100 per cent shareholder in Alliance Group and I know I’d rather be supplying them.

“They are well-established as the leader in sheep meat and I think Handpicked 55 Day Aged Beef will re-ignite the beef side of the business too. My job is producing the best and Alliance’s is processing it in the very best way. From the conversations I have had with them, I am confident that this product is going to be consistent within the ‘black label’ standard. With product of that quality, customers will keep coming back for more.”

Lloyd says he also values the strategic approach Alliance has taken, and the changes it has made to return more value to its farmer shareholders.

“Alliance is the only existing 100 per cent New Zealand owned major red meat co-operative, that is a massive drawcard in itself,” he says. “But there have also been huge changes, absolutely for the good, over the past few years. I appreciate the fact that they listen to their shareholders – it’s very easy to get to talk to the CEO or to a director. The door is always open – I have enjoyed free and frank conversations with them.”

Lloyd says quality and maintaining the highest standards are essential.

“Alliance Group recognises that. They are giving customers what they require, the very best. As producers, we take an intergenerational view of our land and also of our processor.  Alliance works for the long term best interests of farmers.  We have to make sure we are producing the very best product we can. We need to be leading the world, and with products like this, we can be. That means always working on your game and striving a bit harder – and never settling for second best.”

Our Range Our Promise